FANSKICK, MALAYSIA’S LATEST FOOTBALL MOBILE APPLICATION TO REVOLUTIONISE THE FOOTBALL INDUSTRY!
A real game-changing experience which redefines your understanding of a mobile application that
was made for the fans, by the fans!

18 January, 2018: Johor Bahru – Fanskick, Malaysia’s latest football mobile application was launched today in Persada Johor International Convention Centre. Promising to offer a complete one stop centre for the local football fans, Fanskick is officially endorsed by Football Association of Malaysia (FAM) and Football Malaysia Limited Liability Partnership (FMLLP). The event was officiated by His Royal Highness Major General Tunku Ismail Ibni Sultan Ibrahim as President of FAM and the historical event was also accredited by the Malaysia Book of Records as the largest gathering of football clubs for Malaysia’s Super League and Premier League in an event. 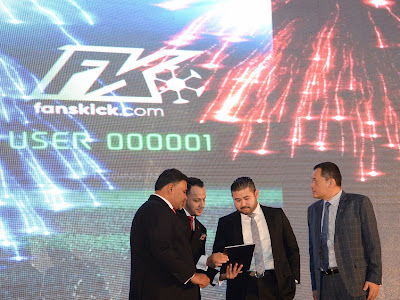 Offering a variety of entertainment and services that a football fan can look forward to having at their fingertips, some of the key features are like Tickets Purchase that promises the convenience of going straight to the stadium’s entrance that will honor their QR code flashed via their mobile phone. Users will also enjoy getting the latest news from Fanskick’s editorial team plus the latest Stats and Fixtures from their favourite players that was not available in the past.

But what makes this mobile application stand out from the rest is through its introduction of Buddy System (Story, Forum and Live Chat), a online chat community that offers the local football fans an oportunity to be closer to their favourite players. Another feature to hook you up is the FK Manager, a football management simulation game where users will be given the opportunity to virtually manage their favourite local league team. The mobile application also offers Live Streaming where users can enjoy football matches not shown by traditional broadcasters.

“Football fans, like me, needed more, and I wondered, what can I do to give more local football content to the fans, and that was how Fanskick was born. By understanding what an avid football fan looks for in terms of convenience and entertainment, we came up with a set of fantastic features targeting men and women aged 12 years old and above. We are also aimed in providing a seamless web of connection between the fans, players and key players in the industry that was aligned with the President of FAM’s vision of revolutionising Malaysia’s football scene. Fanskick is certainly a game-changer of how the sports industry will be like in the future and I am proud to say that we are now leading in this industry,” shared Farouk Mustaffa, Chief Executive Officer (CEO) of Fanskick Dot Com Sdn Bhd. 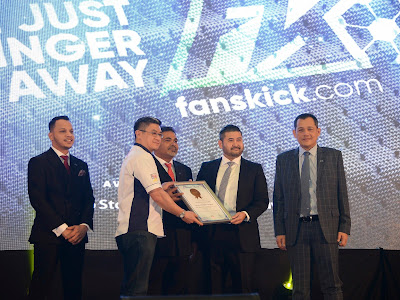 “I want to fix as much in the national team. That will include our playing philosophy, technology, and playing style,” said His Royal Highness Major General Tunku Ismail Ibni Sultan Ibrahim on why a holistic approach that includes technology is vital in the football industry as it will also contribute to the bigger plan of producing better players for the local clubs and consecutively the national team.

With a target of 1 million downloads by the end of the year, Fanskick is ready for action starting from 19th January, 2018.

Available on Google Play and App Store, Fanskick is free of charge with an exception of the Buddy System (a yearly subscription fee) and FK Manager (hidden charges will apply for additional purchases) but in conjunction with today’s launch, users will enjoy a FREE ONE YEAR subscription to use the Buddy System feature.

Football, has and always will be a part of the Malaysian culture. Young or old, for a die-hard football fan, nothing is greater than to watch a live football match what more if it is MCFC (Manchester City Football Club) vs MU (Manchester United). The electrifying atmosphere, club chants, excitement, energy, pain or joy that is felt is indescribable.

English Premier League is one of the most popular football leagues with the highest number of followers, even in Malaysia. It is truly a dream come true for all footie fans to be able to watch a live match in one of the famous stadiums. 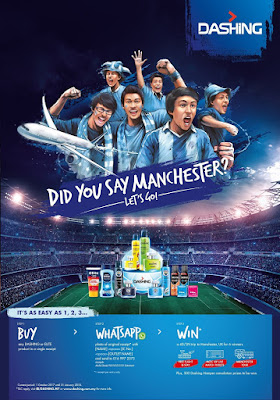 DASHING, the leading men’s grooming brand understands the adrenaline rush and passion men have for the world of football. With this in mind, DASHING is running for the 3rd year the Let’s Go Manchester Contest! Free accommodation, 4 days 3 nights return-trip to Manchester, United Kingdom for 6 lucky winners which includes a VIP ticket to watch a live match between MCFC vs MU as the grand prize in their Let’s Go Manchester Contest! That is 4 great days experience of eating, sleeping and breathing football in Manchester, UK!

Not only will the winners be watching 2 of the greatest football clubs in the world battling against each other from their VIP seats at Etihad Stadium but it also include visits and tours to the National Football Museum and Stadium such as Old Trafford, Etihad and Anfield. Furthermore, there will be a chance to interact and request autographs from some of the MCFC Legends. Besides, there is a Magical Mystery Tour in store for the winners where they will be brought to locations related to the famous music band, The Beatles. What more can a die-hard football fan ask for.

All you need to do is purchase any DASHING or ELITE products in a single receipt and Whatsapp a clear photo of the full single receipt, name as per NRIC or Passport, NRIC number or Passport Number and outlet of purchase to +6016-9972373. It is a simple as that!

So, what are you waiting for? Join now and be the one in the VIP stand watching the live match before your eyes with 50,000 fans and DASHING, the leading male grooming brand in Malaysia! This contest ends on 31st January 2018.

For more information, you can visit www.facebook.com/Dashing.MY or www.dashing.com.my or call the helpline number 03-80238311.
Posted by mystitchycraft at 12:29 AM No comments: